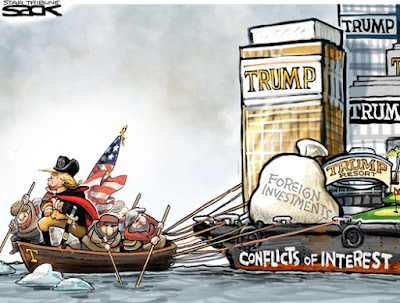 BONUS:  Andy Borowitz' headline says it - Trump to Step Away from Making his Businesses Bankrupt to Focus on Bankrupting Country
Posted by W. Hackwhacker at 2:25 PM

Trump will outdo the Shah in terms of the amount of money he will steal. And sadly, the Teabangelicals would love to emmulate the Ayatollahs and create a Reactionary Theological Dictatorship in response.

Back in 2000 he said he thought he could be the first to run for president and make money on it. Clearly he intends to extend that thought into his presidentin'. I don't think there's any doubt that this will be the most corrupt in US history.