In Trump's America, Racist Dog Whistles Continue To Give Way To Bullhorns


Bill O’Reilly used the “Talking Points” segment on his Fox News show Tuesday night to weigh in on the ongoing debate over the Electoral College, claiming those who’d like to see the system abolished are motivated by race.

“This is all about race,” O’Reilly said. “The left sees white privilege in America as an oppressive force that must be done away with. Therefore white working-class voters must be marginalized, and what better way to do that than center the voting power in the cities.” 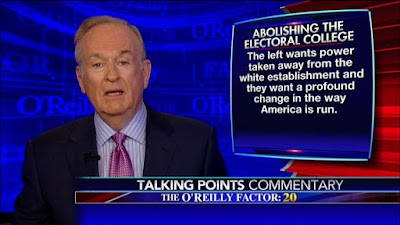 It's all about race, indeed. It's all about this execrable dick simultaneously defending the electoral college victory by Cheeto Jesus with an overt, crackpot appeal to white racism (marginalizing WWC voters by centering voting power in the =cough= black =cough= cities -- yeah, that's what the left is about asshole).  Or, as Martin Longman says,


I know you are not surprised that Bill O’Reilly and Fox News are using their airwaves to tell white people that darkies are coming to get them and change how things are run and take away their privileges and exact revenge on them for the sins of oppression.

I know you are not surprised that, even as they do this, they accuse the left of being the ones who make “everything about race.”

What’s clear from O’Reilly’s rant, however, is that he sees the Electoral College as a bulwark of white privilege and justifiable oppression. And that’s precisely why he likes it and wants to protect it.

In a better America, this racist jackass would not only not have his prime time show, he'd be shunned. But he thinks this is now Trump's America and he can let his racist freak flag fly.
Posted by W. Hackwhacker at 1:13 PM

And, ya know this is just the BEGINNING!!! It's not even 2017 yet.
I wonder if there are some REAL journalists out there that will come forward & fight the good fight?

There may be some, but we're not counting on a lot of profiles in courage, FM.