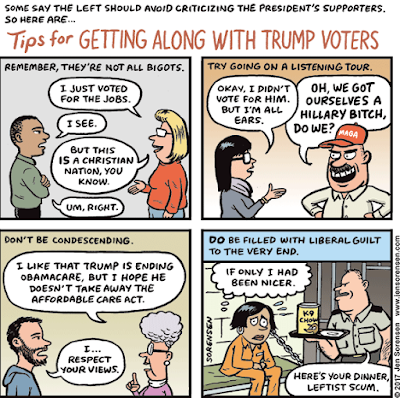 We're Hackwhackers and we approve this message:


Holy mother of god, I'm tired of reading quotes from people who live in places where the local economy went to hell or Mexico in 1979, and who have spent the intervening years swallowing whatever Jesus Juice was offered up by theocratic bunco artists of the Christocentric Right, and gulping down great flagons of barely disguised hatemongering against the targets of the day, all the while voting against their own best interests, now claiming that empowering Donald Trump as the man who will "shake things up" on their behalf was the only choice they had left. You had plenty of choices left.

There's a media cottage industry that's been pumping out Trump voter stories from the hinterland since well into the primaries (and up to and including this week in one of the worst offenders, the once great Washington Post Bezos Bugle). Early on, it was all about those voters' "economic anxiety," and now it's largely about doubts creeping into the dim recesses of some of those Trump voters' minds.

As Charlie Pierce and others have said, we empathize, but we don't sympathize with folks who've not bothered to inform themselves and/ or escape the right- wing media bubble and who voted for the manifestly unfit shitgibbon. They own what's going to happen to them under this emerging plutocratic kleptocracy. As the old saying goes, they've made their bed, now let them lie in it.
Posted by W. Hackwhacker at 2:15 PM