The Straight Line From Nixon To Trump 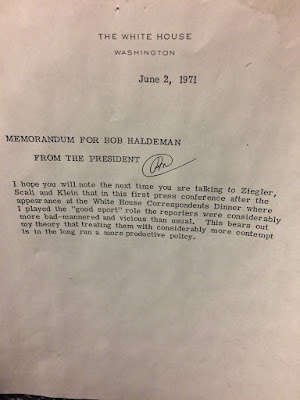 Disgraced former President Richard "Tricky Dick" Nixon was infamous not only for the Watergate scandal which brought his Presidency to an end, but for his contemptuous hatred of the press, which ended up exposing his misdeeds after his illegal attempts to stop leaks.

Fast forward to 2017. Neo-fascist demagogue Donald "Rump" Trump is doing his best to end the investigations into his and his campaign's ties to Russian leadership, Russian oligarchs, and Russian intelligence. He's following Tricky Dick's playbook in "treating [the press] with considerably more contempt" in order to delegitimize them as they expose his connections to a hostile foreign power.

(h/t Balloon Juice)
Posted by Hackwhackers at 11:45 AM