Just when you thought they couldn't go lower, the gun fondling lizards manage to do it. Here's how they're fighting back against the March For Our Lives movement and bullying one of its leaders, 18- year- old Parkland massacre survivor Emma Gonzalez.

At left is @tyler_mitchell’s photo of @Emma4Change for the cover of @TeenVogue. At right is what so-called “Gun Rights Activists” have photoshopped it into. #MarchForOurLives pic.twitter.com/jW6tTOv2Db
— Phillip Picardi (@pfpicardi) March 25, 2018


Instead of ripping up a gun range target, they've photoshopped her ripping up the Constitution.


Actor Adam Baldwin [Alec's half- wit brother] tweeted the doctored video to his over 200,000 followers. The Twitter account for Gab, a social network popular with the alt-right that’s similar to Twitter, also shared the video, which now has more than 1,700 retweets. Gab has also been tweeting other altered photos and memes of González. 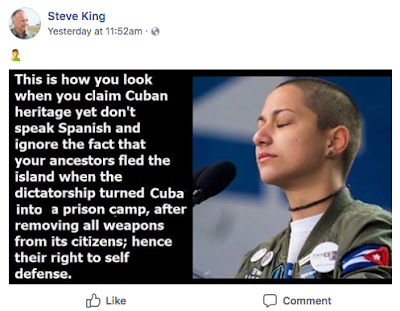 That, of course, is from notorious Republican racist and white supremacist Rep. Steve "Cantaloupe Calves" King (R - Children of the Corn).

You may recall earlier this month one Republican shitweasel attacked her sexuality (he since dropped out of the race he was running in):


A Republican candidate for the Maine House of Representatives has used Twitter to attack two students who survived a mass shooting at a Florida high school, calling one of them a "skinhead lesbian" and the other a "bald-faced liar."

"There is nothing about this skinhead lesbian that impresses me and there is nothing that she has to say unless you're frothing at the mouth moonbat," Leslie Gibson wrote about 18-year-old Emma Gonzalez, one of the most visible student activists to emerge from the shooting at Marjory Stoneman Douglas High School in Parkland, Florida, which left 17 people dead.

Nothing says, "We care about our children; they're the future of our country" than these bullying attacks on a courageous, articulate teenager who's doing more -- under the most difficult circumstances -- to make this a better America than all the aforementioned penis- compensating right- wingers combined ever have or ever will.

UPDATE:  Vox has a summary of the right- wing attacks on the Parkland teens.  Disgusting morons.
Posted by W. Hackwhacker at 6:00 PM

González is a far better human being and a far better American than these knuckle-dragging Deliverance mutants.

Infidel - she sure is. I hope this is another big backfire right in their faces. While the dedicated gun fondlers likely approve of this message, I believe they're driving neutrals or "responsible gun owners" away. Support for stronger gun laws has never been higher.

"...knuckle-dragging Deliverance mutants." -- if you don't copyright that, we're going to use it!

The NRA followers as well as Republicans in general are finally feeling the heat. They thought they were invincible, and they actually have been, but now there's a chink in their armor. And the thought that kids are the ones breaking through is driving them crazy.

You'd think that because they're kids, the NRA and Republicans would back off to a degree, but of course they won't. They will gladly attempt to humiliate, degrade, and discredit those kids. They will continue to lie and spread angry, mean-spirited smears as long as they feel like it. And like cornered badgers, they don't care who gets bitten and scratched as they fight back.

Trump, the supposed president of the country, should have commented on the march and commended these kids. Not only did he abandon DC to play golf again, he took an alternate route to Mar A Largeass to avoid the protesters waiting for him. He's a coward and a liar, as well as being in the pocket of the NRA.

I'm grateful for what the youth movement has done, but we can't leave it at this march. We have to back them up, get as many people registered to vote, and promote the message of reducing gun violence. We owe it to them.

donnah - the NRA and its coin-operated Republicans are revealing just how dangerous this children's movement is to them by their increasingly bonkers attacks. It's one thing to attack a celebrity, a politician or other adult; but when they go after minors who have been forever changed by the gun violence they witnessed, that's an entirely different level of sociopathic behavior.

Their next steps are to "March on November," so they clearly appreciate the need to get the vote out among their peers. Maybe this time we adults can do right by them and vote the gun fondling Republicans out.

I think many of us in a certain age bracket do not understand that this generation of children is genuinely afraid of shootings. We heard it over and over in the speeches that they go to class and the possibility of being shot is very real to them. They have drills to learn how to hide. That takes a toll on young people, and while they may not dwell on it, they still take it with them.

We have to back them up. We have to make sure we support their movement to get out the vote, and we need to make sure they know we are with them all the way.