Across The Universe, Cont. -- The Galaxy With No Dark Matter 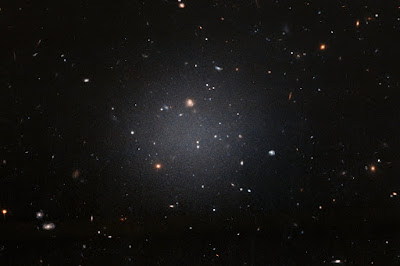 This large, fuzzy-looking galaxy is so diffuse that astronomers can clearly see distant galaxies behind it. This ghostly galaxy is not well-formed. It does not look like a typical spiral galaxy, but it does not look like an elliptical galaxy either. Based on the colours of its globular clusters, the galaxy is about 10 billion years old. However, even the globular clusters are strange: they are twice as large as typical groups of stars.

All of these oddities pale in comparison to the weirdest aspect of this galaxy: NGC 1052-DF2 is missing most, if not all, of its dark matter. The galaxy contains only a tiny fraction of dark matter that astronomers would expect for a galaxy this size. But how it formed is a complete mystery.

Hubble took this image on 16 November 2017 using its Advanced Camera for Surveys.  (our emphasis)


A galaxy without dark matter—or without some bizarre effect of gravity that would mimic dark-matter behavior—would be a very weird thing indeed. Finding such a thing would be like finding smoke but no fire, effect without cause. Yet that is what Yale University astronomer Pieter van Dokkum and his colleagues have just found, they report in a study published Wednesday in Nature.

The galaxy, called NGC 1052-DF2, is about 65 million light years away. It is almost as big as the Milky Way but is “ultra-diffuse,” meaning it contains just a vanishing fraction of the stars found in our galaxy—only 1 percent, in this case. That stellar sparseness means it does not look much like a typical spiral galaxy, but rather a loosely connected, ghostly blob of star-pocked gas and dust. If it contained an amount of dark matter typical for a galaxy of its size, the dark matter’s gravity would hasten the motions of several star clusters that surround it. Instead, van Dokkum’s team found those star clusters moving languidly around NGC 1052-DF2, a sign that there may well be very little or no dark matter within that galaxy at all. That suggests dark matter can be decoupled not only from regular, visible matter, but from entire galaxies—a phenomenon astronomers have never seen until now.

Please read the full article to see why this has shaken up assumptions and theories about gravity and dark matter in the universe.
Posted by W. Hackwhacker at 6:15 PM

Thanks for the link, Hackie!

Diva & donnah -- Can you imagine if we didn't live in a tabloid, short attention span world, this would have been a bigger story when it came out last week? Instead the news is filled with President Spanky and his crew of corrupt cronies.

We must keep in mind, of course, that "dark matter" is just a placeholder term for whatever turns out to be the explanation for the fact that galaxies have a lot more gravity than the mass of visible material in them can account for. "Dark matter" might really be a kind of matter, or it might be something else.

Whatever it is, the fact that NGC 1052-DF2 is definitely an anomaly.

I wonder if, at some level of technology far more advanced than ours, dark matter is actually a useful resource.

Infidel -- The more we know, the less we understand sometimes. What a time to be living in, though.