Nunes Losing Ground In His District 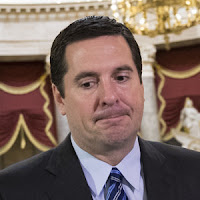 Larry Sabato, a top election forecaster with the University of Virginia's Center for Politics, has changed the rating for the re-election chances of Trump lackey and water carrier Rep. Devin "Sherlock" Nunes (R-Conspiracy) from "safe Republican" to "likely Republican." Nunes is infamous for his partisan defense of Putin loyalist Donald "Rump" Trump as chair of the House Intelligence Committee, shutting down the investigation and issuing a report that might as well have been written in the White (Supremacist) House.

While Nunes is still the odds-on favorite to retain his seat, his slavishly loyal service to Rump has had some Rethuglicans in his district wondering whether he's doing his job as a check and balance, not to mention simple constituent care and feeding. His likely opponent, Fresno County deputy district attorney Andrew Janz, has been fighting a good fight, raising more than $1 million from January through March of this year. This is one seat that we'd love to see flip.
Posted by Hackwhackers at 3:00 PM

I'd love to see Nunes flipped out of his seat into a raging bonfire.