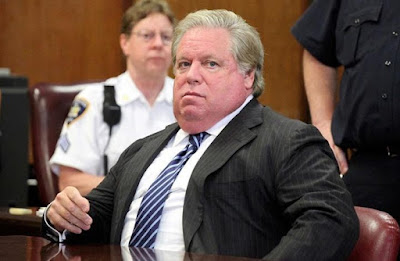 Rethuglican mega-donor and former Rethuglican National Committee deputy finance chairman Elliott Broidy is reported to have fathered a child with a Playboy playmate last year, who subsequently had an abortion. Broidy is paying the woman $1.6 million, an arrangement brokered by none other that skeevy lawyer and hush money "facilitator" Michael Cohen, the fixer for corrupt narcissist Donald "Rump" Trump. Broidy confirmed the relationship, but claimed the decision to terminate the pregnancy was the woman's. Riiiiiight! Gotta keep the anti-choice mob dumb and happy.

Broidy has now resigned his position with the RNC following the breaking news. Just last month, Broidy was named an investigation of the sanctioned Russian bank VTB for a multi-million deal involving lobbying for the bank. He's also implicated in an influence-peddling scheme involving Saudi Arabia and the United Arab Emirates that has been exposed by the Mueller investigation. Seems like a clean-cut guy and patriot.

Broidy joins former RNC Finance Chairman Steve Wynn, who resigned his position earlier this year after reports of sexual misconduct surfaced and, of course, Cohen himself, who remains RNC National Deputy Finance Chairman, in the Republican Party's ever- expanding Hall of the Shameless.

Forgive me the looksism, but it's no surprise that these guys have to pay for sex.