The Ghoul Attacks A Veteran 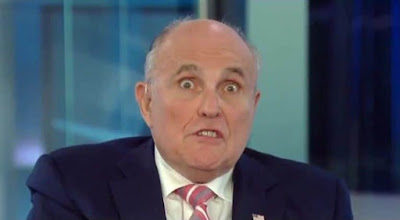 Of all the disgusting people around corrupt narcissist Donald "Rump" Trump, lying ghoul and bumbler Rudy "Noun, Verb, 9-11" Giuliani is one of the most odious. During the campaign, he was consistently the shrillest and most defamatory voice -- save Rump's -- attacking Hillary Clinton and Dems using lies and fear as his tools. Now, as Rump's comically sinister TV lawyer, Giuliani has plumbed new depths, from his attacks on the legitimacy of the Mueller investigation to smearing patriotic public servants who have spoken out about Rump's corruption, pathological lying and potential treason.


“You really believe that people like Brennan and Clapper are part of a deep state conspiracy?” Bash asked.

“I don’t know what you want to call it,” Giuliani replied. “But I have no regard for all for Clapper and Brennan. I think they’re two clowns. Clapper is talking about spying, which he doesn’t realize it’s spying on the Trump campaign. He’s [had] an obligation to tell them.”  (emphasis added)

Clapper, who served with great distinction in the Air Force from 1963 to 1995, received the Legion of Merit medal three times, both the Bronze Star and the Air Medal twice for his service in Vietnam. As we prepare to observe Memorial Day, let's contrast James Clapper's service with Giuliani's:


"Giuliani did not serve in the military during the Vietnam War. His conscription was deferred while he was enrolled at Manhattan College and NYU Law. Upon graduation from the latter in 1968, he was classified by the Selective Service System as 1-A (available for military service). He applied for a deferment but was rejected. In 1969, Judge MacMahon wrote a letter to Giuliani's draft board, asking that he be reclassified as 2-A (civilian occupation deferment), because Giuliani, who was a law clerk for MacMahon, was an essential employee. The deferment was granted. In 1970, Giuliani received a high draft lottery number; he was not called up for service although by then he had been reclassified 1-A." -- Wikipedia

While Clapper was serving his country in war time, draft-dodging Giuliani was pulling strings to avoid service, much like his despicable puppeteer Rump, a.k.a. Cadet Bone Spurs (and "The Dick" Cheney, etc.). Remember this on Memorial Day when you hear the degenerate likes of Giuliani calling a patriot a "clown."

Giuliani isn't fit to carry Clapper's shoes. I saw an interview with Clapper on Rachel Maddow's show and he has more class in his pinky finger than Giuliani would ever have in his entire scrawny body.

Clapper is also experienced, intelligent, and decent, none of which Giuliani will ever be. And he tried tactfully to explain how little he thinks of Trump and made it clear that he thinks Trump and his administration are a disaster. Clapper's book is going onto my must-read list. I think it will clear up a lot of things behind the scenes.

Giuliani, shut your yap and retire.

donnah -- The other day, Michael Avenatti suggested that the media investigate Giuliani's past business dealings. No doubt they'd find some of the same shady deals that are being exposed in Trump's and Michael Cohen's scams. When he started exploiting 9-11 for his own aggrandizement, whatever integrity he had evaporated. He's a bottom feeder.