"These Aren't People. These Are Animals"


Will this country ever recover from the debasement of human values that this malignancy exhibits every day?

President Trump during California #SanctuaryCities Roundtable: "These aren't people. These are animals."


BONUS II:  If his lips are moving, you know Trump's lying --


The truth, via Josh Marshall:


But no law “the Democrats gave us” mandates the separation of children from their parents at the border. The administration is using protocols described in a 2008 law designed to combat child trafficking that gave special protections to Central American children at the border. While the bill was authored by Democratic Sen. Dianne Feinstein, it unanimously passed both houses of Congress and was signed by Republican President George W. Bush as one of his last acts in office. (our emphasis)

What a lying swine (now there's an animal for you!)! 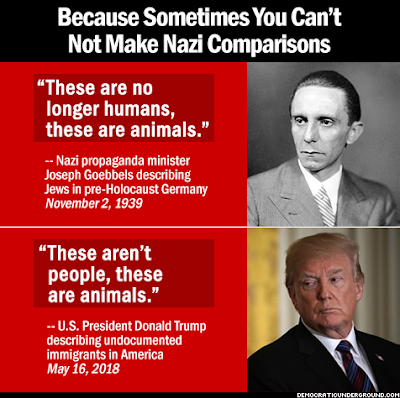 (Attribution: democraticunderground.com)
Posted by W. Hackwhacker at 7:44 AM

You just asked the question for the ages, Hackie. It'll take years, decades, to undo what this ignorant excuse for a human being and his cohorts in Congress have done to us. What we've done to our immigrant population, our foreigh policy and standing in the world is beyond criminal.

Diva - if you'd searched the world, you couldn't have found a worse "thing" to be the representative of our country. You're right, it is beyond criminal.

Trump's no Idi Amin...yet. But dehumanizing, racist, and nationalistic actions will all add up to a dangerous state of affairs. Trump is dragging our country down and no one is pulling him back. When a president does not respect basic human rights, we become toxic as a nation. He has already shown his blatant disrepect for women, the disabled, African Americans, Mexicans, and other minorites. Throw in the poor and the elderly and you have a country that exists solely as a bank for the wealthy.

It seems this will never end, but I still have hope.