Trumper Tattoos: The Ink That Stinks 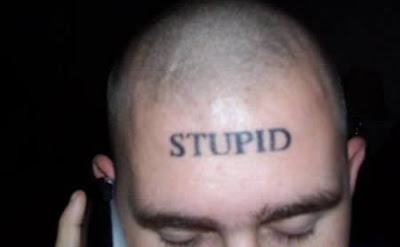 There are plenty of Trump cultist morons out there. Some of them even like to wear their idiocy on their own skin. Tattoo shop owner Bob "Boob" Holmes of Seabrook, NH likes to display his loyalty to the orange-hued demagogue all over his body, with Trumpist slogans tattooed everywhere. He's even provided free tattoos to Trump cultists, 78 in all. Some of his vapid customers spoke of their belief in their Great Leader. Says customer Bob Fowler in an inadvertently honest way:


“People can say he’s a buffoon, he’s a TV personality, and all these things.” Cook said. “That might be the case, but he’s also very smart, he’s got a lot of business acumen; He’s the right guy for the job.”

Yes, he's a buffoon, but he's a smart buffoon and "the right guy for the job" with access to the nuclear launch codes. And that "business acumen" of his?  Six bankruptcies (including a casino), dozens of failed branding scams including the fraudulent "Trump University," and getting that sweet kompromat money from Russia and China because U.S. banks wouldn't lend to him. He's a business genius, Mr. Cook.

Tattoos are painful to get, but even more painful to remove, not that these yahoos will ever do that. They can't be reasoned with, only outvoted.
Posted by Hackwhackers at 10:15 AM

Labels: Trump cultists getting their leader's words and image tattooed on them

Maybe it's wrong, but every time I see a Trump or MAGA bumpersticker, I get a sense of revulsion, and think to myself, “Hey, buddy, I instantly dislike you” because the driver had labeled himself as an idiot. I have zero tolerance for Trump supporters, ZERO.

donnah -- Our sentiments exactly. It's incredible that so many people could be conned by the monster in the White House, and be unashamd that he conned them. So much winning!