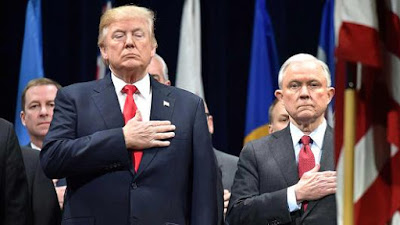 We've watched for some time the Trump regime's viciously inhumane practice of separating children from their parents when they cross the border seeking asylum.  Amid all the other outrages happening every day in this country, this is perhaps the most heart- breaking, but one to which we seem to have become numb, even as it violates every moral and ethical precept we're supposed to believe in as a country.  It's somewhat quaint at this point to imagine that we'll ever have the authority as a nation to speak in those terms again after this ugly nativist id -- manifested in the demagogue- in- chief -- is finally over.

The stark reality is that children as young as 18 months old are being separated from their parents by Immigration and Customs Enforcement (I.C.E.) agents. Of course, the intent by this "pro- life" regime is to discourage immigrants from attempting to seek asylum in the U.S. with the threat of breaking up their families.  The perversity of this policy, as well as its many unintended consequences, is demonstrated by Vice's Meredith Hoffman:


“Why do I have to leave? Mami I want to stay with you!” one four-year-old El Salvadorian boy balled to his mother, known as JIL, as CBP officers took him and his ten-year-old brother away from her in South Texas, according to an affidavit filed by the mother. They were separated in March—before Sessions’s policy even officially launched—but the incident is an example of what is now common practice at the border. The brothers slept in the same room as their mother back in El Salvador and were too anxious to go to the bathroom without her after witnessing MS-13 gang members beat and threaten her. But once they arrived in the US, the boys were placed in two separate foster homes and held in government custody for over a month without being able to speak with their mother, who remains in Laredo Detention Center, JIL’s attorney Denise Gilman told me.

The boys are now staying with other family in Virginia, but JIL will likely be detained for many more months: A San Antonio judge Wednesday issued her a bond too high for her to pay—$12,500—deeming her a flight risk for being connected to a gang, when her sole connection was the harm they did her.  (our emphasis)

Please read her entire piece to get a better picture of what a shitshow this regime and its over-eager I.C.E. thugs have made of immigration policy and our image as a nation.

An further Orwellian touch was added this week, demonstrating that the Trump regime's inhumanity is perhaps exceeded only by its incompetence:


A top official with the Department of Health and Human Services told members of Congress on Thursday that the agency had lost track of nearly 1,500 migrant children it placed with sponsors in the United States, raising concerns they could end up in the hands of human traffickers or be used as laborers by people posing as relatives. [snip]

The children were taken into government care after they showed up alone at the Southwest border. Most of the children are from Honduras, El Salvador and Guatemala, and were fleeing drug cartels, gang violence and domestic abuse, government data shows.  (our emphasis)

This is what happens when you consider these people to be "animals," as the black hole at the center of our government has called them (and don't give us any shit about who he was referring to; it's a feature for him, not a bug).  Imagine the terror these children are experiencing, having fled their country's violence, only to be treated like "animals" upon arriving at the border, being separated from their parents for no other reason than to deter others from coming north.

I am reading these first-hand accounts of mothers who had their children taken from them, with no word of where they were going or how to contact them, and I'm thinking about someone doing that to me and my kids and I feel a rage so powerful I think I'm gonna pass out.
— Chris Hayes (@chrislhayes) May 25, 2018

It isn’t easy for a man to rip a screaming child away from his mother. Most of us couldn’t do it. This is where “animals” comes in. Declare he isn’t really a child, she isn’t a woman. Now it’s like pulling a piglet from a sow. This has always been how states enable savagery.
— Radley Balko (@radleybalko) May 26, 2018

Every time I read one of these stories about the thousands of families ICE has ripped apart, sometimes forever, I think about all the rich white people who will come out of the Trump administration saying & believing it honestly wasn’t that bad https://t.co/PKbfKTXzpy
— Jia Tolentino (@jiatolentino) May 25, 2018

UPDATE:  The Border Patrol also has ways of treating "animals"--


SHE HAS A NAME: unarmed 20 year old, Claudia Patricia Gómez González, from Guatemala, was shot and killed by an ICE agent on Wednesday near Laredo, Texas. pic.twitter.com/mNTgaomOvD
— Michael Skolnik (@MichaelSkolnik) May 25, 2018

UPDATE II:  Of course, the pathological sociopath is trying to blame ... Democrats.


(Photo:  no sign of heartbeats there)
Posted by W. Hackwhacker at 8:45 AM

It's difficult not to be overwhelmed by the tragedy of what ICE is doing. I can't imagine as a human being being able to literally pull crying children out of their parents' arms and being able then to sleep at night. I actually know a guy who was a border patrol agent out west, and he was a jerk before he was ever assigned out there. I can picture him doing these cruel things and not batting an eye about it. There are people who thrive on cruelty.

This administration is overflowing with inhumane actions against women, people of color, gays, and immigrants. Their goal to purge our country of all minorities is sick and twisted. We cannot exist as an all white nation because it's wrong, and unless we stand up to it, things will only worsen.

I'm ashamed for what they are turning us into.

donnah - thank you for that!

DITTO what donnah said.
This thing calling itself potus has gone from being a laughable buffoon to a soulless, immoral subhuman, dangerous POS!!!