Will Blankenship Be A Spoiler? Let's Hope So (UPDATED) 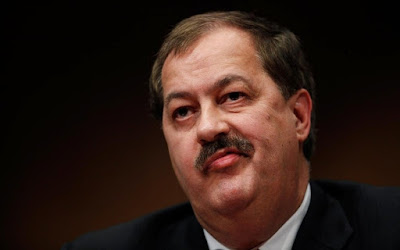 Admittedly, we had some mixed feelings when convicted felon and bigot Don "Big Shit" Blankenship lost the West Virginia Rethuglican nomination for Senate a couple of weeks ago. On the one hand, he likely would have been the weakest Rethuglican to face endangered incumbent Sen. Joe Manchin. On the other hand, it's always good to see a transparent demagogue get crushed.

Now, we're cheering on reports that an angry Blankenship is prepared to undermine the Rethuglican nominee, Patrick Morrissey, whom Blankenship describes as a "corrupt carpetbagger." A New Jersey native, Morrissey is a former lobbyist for pharmaceutical companies < cough opioids cough > who moved to West Virginia in 2006.

As someone who has deep pockets, Big Shit may decide to run ads in the state opposing Morrissey. Though he can't run as a third party candidate due to the State's "sore loser" law*, if he could manage to persuade the 27,000 voters that cast their ballots for him to stay home or write in his name, that may be enough to swing the election to Manchin in a blue wave year. It's much too early to forecast that, but Big Shit has his sights set on the Rethugs that brought him down in the primary. That's something we can get behind.

*UPDATE:  Looks like Big Shit IS going to run a third party campaign and dare the courts to stop him.
Yesss!

(photo: Bad taste in your mouth? It's you.)
Posted by Hackwhackers at 2:30 PM