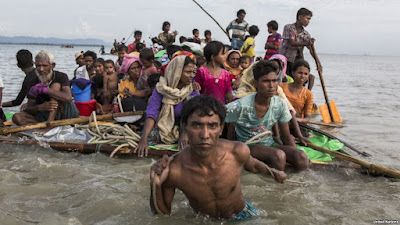 In a report issued by the U.N.'s Independent International Fact-Finding Mission on Myanmar, investigators charge that six senior Myanmar military officials ordered mass killings, the torching of villages, and rapes of the Muslim Rohingya minority. The report recommends that the general officers involved be prosecuted under international law regarding genocide.


“...has not used her de facto position as Head of Government, nor her moral authority, to stem or prevent the unfolding events, or seek alternative avenues to meet a responsibility to protect the civilian population."

Roughly a year ago, the country's military began a brutal crackdown on Rohingya dissidents, and drove some 700,000 Rohingyan Muslims into neighboring Bangladesh, which has struggled to cope with the massive influx resulting from the ethnic cleansing. While the U.S. State Department has not officially commented on the U.N. report, the British foreign ministry said "there cannot and must not be impunity for such acts."

Two journalists working for Reuters remain in jail since December for reporting on the brutal crackdown. The verdict in their case is scheduled to be delivered by a Myanmar judge on September 3.