For courageous sexual assault victim Dr. Christine Blasey Ford, the searing memory from her attempted rape was the laughter of drunken prep thug Brett "KavaNut" Kavanaugh and his sick sidekick from Georgetown Prep, Mark Judge. We can't escape the infuriating and powerful story she told of KavaNut's hand over her mouth while he was trying to remove her clothes: the silencing a female victim -- just 15 --  by a more powerful male, an obscenity which continued into last week's hearing courtesy of the all-white male Rethuglican Judiciary Committee majority. Two artists have captured the essence of the outrage. November can't come soon enough. 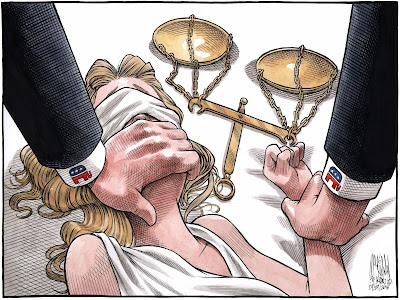 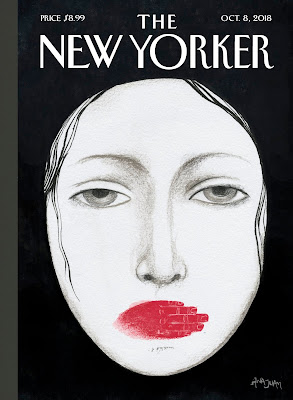 (from top: Bruce MacKinnon, Halifax Chronicle Herald; Ana Juan, for the October 8 cover of The New Yorker)
Posted by Hackwhackers at 7:30 AM

It seems incredible to me that women are still held to a second tier status in this year of our lord 2018. We are not believed, we are not equal work partners, and our voices are repeatedly drowned out by resounding echoes of male privilege.

We have made progress, but we always lose ground that has to be fought for over and over. Decided law suddenly becomes debate-worthy again and we look forward to ongoing battles yet again to protect our ownership of our bodies. It's exhausting. It's criminally wrong. It's inexcusable.

We will march again, en masse, as protest. We'll fight as hard as we can at the polls. But until the people in this country and others accept that women deserve equal rights, it's going to be the same thing again and again.