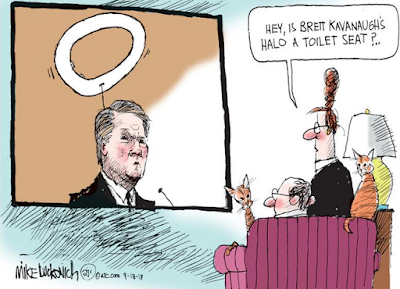 Watching Brett Kavanaugh playing the ludicrously virginal choir boy (the alter ego of rapey drunk "Bart O'Kavanaugh") with his stricken wife at his side in the Monday night interview on friendly Fox News has compelled several more Kavanaugh college friends to call out his blatant lies:


Liz Swisher, who described herself as a friend of Kavanaugh in college, said she was shocked that — in an interview focused largely on his high school years and allegations of sexual misconduct — he strongly denied drinking to the point of blacking out.

“Brett was a sloppy drunk, and I know because I drank with him. I watched him drink more than a lot of people. He’d end up slurring his words, stumbling,” said Swisher, a Democrat and chief of the gynecologic oncology division at the University of Washington School of Medicine. “There’s no medical way I can say that he was blacked out. . . . But it’s not credible for him to say that he has had no memory lapses in the nights that he drank to excess.”

Lynne Brookes, who like Swisher was a college roommate of one of the two women now accusing Kavanaugh of misconduct, said the nominee’s comments on Fox did not match the classmate she remembered.

“He’s trying to paint himself as some kind of choir boy,” said Brookes, a Republican and former pharmaceutical executive who recalled an encounter with a drunken Kavanaugh at a fraternity event. “You can’t lie your way onto the Supreme Court, and with that statement out, he’s gone too far. It’s about the integrity of that institution.”  (our emphasis)

He's a "smooth liar" -- but not smooth enough by half.  He's already been caught lying about his past actions as a Republican operative throughout his confirmation testimony. No wonder he doesn't want to "clear his name" by having the FBI question him under oath (unlike his accusers).

Seth Meyers also has a "Couple Things" to discuss regarding the Kavanaugh appearance on Fox News:

In the meantime, more corroborators of Dr. Christine Blasey Ford's account of Kavanaugh's sexual assault have stepped forward (see post below).  There's an awful lot of smoke here, and it's not of the dry ice variety.

A lying, drunk, serial sexual assaulter to be installed on the Supreme Court for life.  Well, you have to say he largely fits the profile of rotted out, privileged white male Republicans who never had to answer for their misbehavior (see also, "Trump, Donald").

BONUS:  Booman has a good read on Kavanaugh's lying self.
Posted by W. Hackwhacker at 10:30 AM