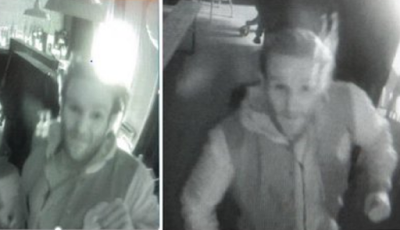 Last week, Comet Ping Pong, a pizza restaurant in northwest Washington, DC, was the victim of a small fire set by a white male. The establishment gained national attention when loony far-right conspiracy mongers claimed that Secretary Clinton operated a child pedophile ring (i.e., "Pizzagate") in its basement (when it has no basement). In 2016, a man from North Carolina showed up at Comet with an AR-15 to "investigate" the conspiracy and fire off a few rounds. He was arrested and he's now serving a 4-year prison sentence.

The Bureau of Alcohol, Tobacco and Firearms (ATF) and the DC Metropolitan Police are investigating and are looking for the suspect. While there's no direct evidence of a connection between this incident and the one in 2016, we would bet a hamberder that it's an alt-right cultist they'll find.

BONUS:  Wonkette looks under some rocks to get reactions from the loons.

(photo: Did he leave his MAGA cap at home? ATF photo)
Posted by Hackwhackers at 6:00 PM