Can You Pick Out The Sucker In This Scenario? 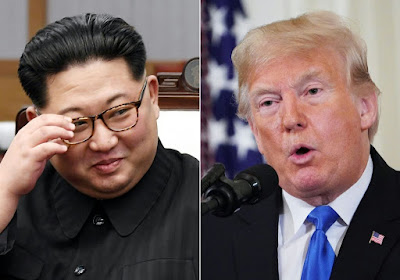 Under daily pressure from the looming Mueller report into his ties with Russia and indictments to come, the upcoming Michael Cohen hearing on his family's corrupt business dealings, his inauguration committee's pay- for- play scandals, and his cabinet's incompetence and corruption, all the while facing resistance to his power grab over his manhood wall, Donald "Rump" Trump, who reads nothing, believes Putin rather than his intelligence community, and who's looking for a distraction is getting ready for another "summit" with North Korean dictator Kim Jong Un.  What could possibly go wrong?

President Donald Trump is eagerly anticipating his second summit with Kim Jong Un, touting his “really meaningful” relationship with the North Korean strongman and insisting he’s ready to give up his nuclear arsenal.

In Washington, he’s pretty much the only one who feels that way.

Many, including several of the president’s top advisers, are less excited. Some have expressed trepidation not only that the summit, scheduled to take place next week in Hanoi, may not yield big results. They worry, too, that Trump, eager to declare victory on the world stage, could make big concessions in exchange for empty promises of denuclearization.

The push for a second summit came almost entirely from the president himself, according to current and former White House officials — but Trump remains undeterred. He has gushed about the “wonderful letters” he has received from Kim, as well as the “good rapport” he has developed with the North Korean leader and the enormous media coverage the event in Vietnam's capital is likely to attract. Trump even bragged, in a phone call Tuesday with South Korean President Moon Jae-in, that he is the only person who can make progress on denuclearizing the Korean Peninsula, according to a person briefed on the conversation, and complained about negative news coverage he has received. (our emphasis)

The North Koreans, who aren't led by a moron, know how to get the most from the U.S. without giving up anything:


“If the working-level people were achieving what they wanted to achieve, then I’d feel really good about this, but the North Koreans know that they can get a better deal from the president, so they’d rather talk to just him,” [former NSC official Victor] Cha said.

“The North Koreans basically won’t deal with anybody other than Trump. They won’t deal with [Special Representative for North Korea Stephen] Biegun, they won’t deal with Pompeo, so if there’s going to be any movement, it’s going come at that level,” said a former administration official. “The summit does have some potential to do good because it can break the logjam. But coming out of the summit, Trump is going to want to declare it a success and a victory and everybody else will be frustrated because nothing really has changed.”  (our emphasis)

Rump's own intelligence community has been telling him over and over that the North Koreans aren't going to denuclearize, and are in fact continuing to conduct a long- range nuclear missile program. What they want is for the U.S. to agree to a peace treaty and, most importantly, the destablilizing removal of American troops from South Korea (the latter something Rump has been amenable to in the past).  Having a narcissistic ignoramus in this fraught situation, who's looking for a "win" in the midst of the daily shitshow of his regime, is needless to say a recipe for disaster, particularly now that the supposed "adults" in the room are all gone, replaced by sycophants and weaklings.  So, the question isn't if Rump will give away something, it's what and at what cost it will be to the security of the U.S. and our east Asian allies.

Somewhere in the Kremlin, Putin is enjoying himself immensely.
Posted by W. Hackwhacker at 12:00 PM