Hostilities Escalate Between India and Pakistan


While most attention has been focused on the Trump Follies -- the meeting with North Korea and the testimony of Michael Cohen -- a serious escalation in the volatile region of Kashmir has occurred with the Indian Air Force striking militants in Pakistan. The airstrike on the Pakistani town of Balakot was in retaliation for the group Jaish-e-Mohammad's terrorist attack on February 14 in India, which killed 40 Indian troops. India holds Pakistan responsible for sponsoring the attack and for harboring the group in Pakistan. Pakistan condemned the attack and said it would respond "at the time and place of its choosing." 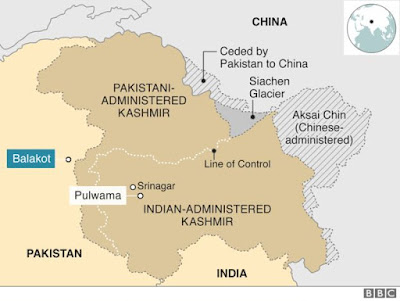 A 1971 war between India and Pakistan resulted in the nuclear armed countries dividing Kashmir into zones administered by each country, which both claim the entirety of Kashmir. These strikes were the first cross-border airstrikes since the 1971 war.


"Just as India threatens war in retaliation, assurances Pakistan received from both Saudi Arabia and China bolstered its decision that there was no need to go after Jaish-e-Mohammad, the terror group that took responsibility, and whose leadership is still living openly inside Pakistan."

The odds are that this won't end soon or happily.