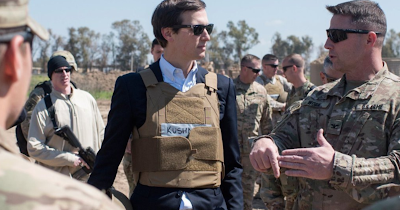 The new book by journalist Vicky Ward, "Kushner, Inc.", has been delivering revealing details about how demagogue and Russian asset Donald "Rump" Trump's son-in-law Jared "Mr. Ivanka Trump" Kushner, including the allegation that Rump wanted him and his lusted-after daughter back in New York but was to timid to confront them directly, asking then chief of staff John Kelly to be the bad guy

Now, in an example of the influence of these two poster children for undeserved and corrupt nepotism, the book tells the story of how Kushner tried to smear someone who refused a position in the White (Supremacist) House. From ABC News:


"When Mark Corallo, then the spokesman for President Donald Trump’s legal team, declined an offer to take over as the White House communications director in the summer of 2017, Jared Kushner reportedly refused to take 'no' for an answer.

'Don’t you want to serve your country?' Kushner, according to a new book, asked Corallo, an Army veteran and longtime Washington public relations executive. 'Young man,' Corallo reportedly replied, 'my three years at the butt end of an M16 checked that box.' [snip]

Soon after, amid an onslaught of negative press coverage calling his integrity into question, Corallo reportedly received a call from a reporter who informed him that a Kushner aide had been dispatched to '[thrash him] all over town.' (our emphasis)

This is their modus operandi. When they don't get their way, they pout and punish the commoner that doesn't obey them. You can be assured that they stamped their feet when they didn't get a top secret security clearance because of their shady and compromising international business dealings, which the CIA / FBI / NSA surely documented.

It's worth noting that Corallo was present when the cover story on the meeting with Russian operatives with greasy Donald Trump Jr., Paul Manafort, and Jared in June 2016 in Trump Tower was concocted. He refused to go along with the false story that the meeting was about "Russian adoptions." Corallo's been cooperating with Special Counsel Robert Mueller, so he may have the last laugh on Javanka.

(photo: "Soldier, could you direct me to the nearest club. I'd like a Veuve Clicquot to toast my arrival!")
Posted by Hackwhackers at 5:00 PM