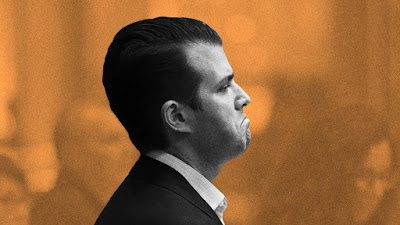 
"There are reasonable arguments that the offered information would constitute a “thing of value” within the meaning of these provisions, but the Office determined that the government would not be likely to obtain and sustain a conviction for two other reasons: first, the Office did not obtain admissible evidence likely to meet the government’s burden to prove beyond a reasonable doubt that these individuals acted “willfully,” i.e. with general knowledge of the illegality of their conduct; and, second, the government would likely encounter difficulty proving beyond a reasonable doubt that the value of the promised information exceeded the threshold for a criminal violation." (our emphasis)

Translation: Greasy Don Jr. was too stupid to realize he was committing an illegal act. D'oh!

(image: You can't fix stupid, only inherit it.)
Posted by Hackwhackers at 5:30 PM