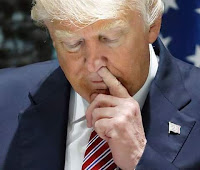 Extremely Stable Genius Donald "Not Exonerated" Trump's knowledge apparently extends to naval architecture and systems. For years, the Navy has used steam-powered catapults to launch aircraft off of carriers, but has decided that for the new Gerald Ford class carriers, the electromagnetic aircraft launch system (EMALS) will replace the steam-powered system. Enter naval engineer Trump. In a speech to soldiers and sailors stationed in Japan, Trump took issue with EMALS, complaining about cost overruns, and announced that future carriers would use steam-powered launch systems. Cost overruns -- sunk costs -- aside (what Pentagon system doesn't have them?), EMALS has some advantages:


"Its main advantage is that it accelerates aircraft more smoothly, putting less stress on their airframes. Compared to steam catapults, the EMALS also weighs less, is expected to cost less and require less maintenance, and can launch both heavier and lighter aircraft than a steam piston-driven system. It also reduces the carrier's requirement of fresh water, thus reducing the demand for energy-intensive desalination.

China is reportedly developing a similar system." (our emphasis)

So the Extremely Stable Genius has waved away the studies of competent Naval experts and decided that the old way will do. It's a good bet that he heard that EMALS was signed off on by President Obama, thus it needs to be erased.