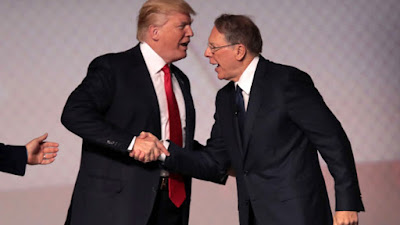 The slow-motion meltdown of the odious National Rifle Rampage Association over internal coups, charges of misappropriation of funds, and lavish spending on travel and clothes by its head monster Wayne LaPierre, has sent shockwaves through its subsidiary, known as the Rethuglican Party. Rethuglicans have counted on the NRA for ginning up its membership by sowing fear of Dems taking their guns away, and for funneling millions of dollars to Rethug politicians, including $30 million to support con man and sociopath Donald "Rump" Trump in 2016.

The coffers of the NRA are drying up, due to mismanagement of their resources, e.g. NRA TV which recently shuttered, and a general lack of passion for contributing among members now that their guy is in the Oval Office. To make matters worse for the NRA, lawsuits against its member companies are moving forward, the latest being against eight gun manufacturers by the family of a victim of the horrendous Las Vegas massacre, which killed 58 and wounded roughly 800 concert goers in October, 2017.

The NRA's ties to Moscow are the subject of an investigation by the House Judiciary Committee, which is looking into the Russian effort to penetrate right-wing organizations with agents (e.g. Maria Butina and Alexander Torshin) and how much Russian money flowed into the NRA to support Trump and other Rethug politicians. Maybe LaPierre has a dacha waiting for him in Mother Russia if this thing blows up.

BONUS:  The rotting decay on the right continues, with the decline of Breitbart.com as a force in the right- wing Wurlitzer.

A somewhat silver lining around the dark cloud of the nra & for us. For now. NEED MORE, PLEASE!!

F.M. -- Hope this is the beginning of the end for them, but somehow that would be too good to be true.