QOTD II -- A Dark Underbelly That's Racist To The Core 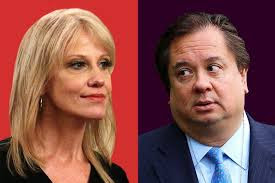 “What the president is doing is we are tired—we’re sick and tired of many people in this country. Forget these four...They represent a dark underbelly in this country of people who are not respecting our troops, are not giving them the resources and respect that they deserve. They voted against the military aid.” -- utterly vile Trump lickspittle Kellyanne "Mouth of Sauron" Conway today on Fox "News," defending and deflecting from Trump's racist tirade against four Democratic Congresswomen.  "Dark underbelly"?  WTF.  That's how this particular dog whistler gaslights and projects that these Congresswomen are somehow un- American and "other."  By the way, the majority of Americans are sick and tired of you and that shitwhistle to whose ass your lips are attached.

"...Telling four non-white members of Congress — American citizens all, three natural-born — to “go back” to the “countries” they “originally came from”? That’s racist to the core." -- never- Trump Republican and Kellyanne's no doubt suffering husband George Conway discovering finally that Trump's a racist, today in the WaPo.  He should love his wife's latest comments.  Maybe his next op/ ed can be "I just found out Kellyanne Conway is a racist spokesperson."

BONUS: The Mouth of Sauron also just asked a reporter asking a question about Trump's racist tweets "What's your ethinicity?"


Kellyanne Conway is the coverghoul for Racist Monthly magazine and the posterchild for Trump's Hateful Daily. She comes out and spews Trump's disgusting messages and does so in a spiteful and mean-spirited way. She's bitter and stringy and hateful. And she has the gall to ask a journalist about his nationality? WTF?

This administration is full tilt insane. They are barreling down a road to hell and they're dragging us with them. How in the world can we stop this? We will be in tatters long before the elections in 2020. They are killing us.

The Case of "Shelley-Anne"

donnah and IBW -- you've both depicted the Mouth of Sauron accurately!