Because It's Always About Him 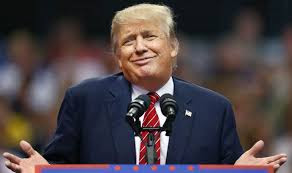 
In his upcoming memoir, newly appointed Smithsonian Secretary Lonnie G. Bunch III describes the private tour he gave President Trump of the National Museum of African American History and Culture, recalling that Trump’s reaction to the Dutch role in the global slave trade was, “You know, they love me in the Netherlands.”  [snip]

“The president paused in front of the exhibit that discussed the role of the Dutch in the slave trade,” Bunch writes. “As he pondered the label I felt that maybe he was paying attention to the work of the museum. He quickly proved me wrong. As he turned from the display he said to me, ‘You know, they love me in the Netherlands.’ All I could say was let’s continue walking.”

Bunch's book also revealed that "The Chosen One" didn't want to see anything "difficult" during the tour because, as his staff told Bunch, he was in a "foul mood."  Given that the tour was not long after he was ridiculed for exaggerating the size of his inaugural crowd, we suspect that was what was eating at the dumbass.

BONUS:  Steve M. at No More Mister Nice Blog has more on the episode, including what the Dutch really think about The Chosen One.