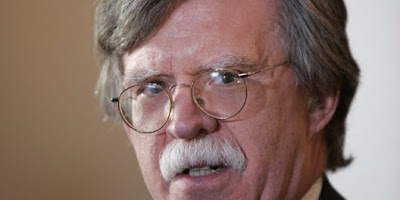 The Trump regime's most prominent neocon and war hawk, National Security Advisor John "Loose Bolt" Bolton, seems to have been sidelined in some key national security discussions, most prominently on Afghanistan policy. According to the Washington Post, Bolton's ingrained tendency to push for military action before diplomacy has virtually iced him out of some meetings:


"Bolton, who has long advocated an expansive military presence around the world, has become a staunch internal foe of an emerging peace deal aimed at ending America’s longest war, the officials said.

His opposition to the diplomatic effort in Afghanistan has irritated President Trump, these officials said, and led aides to leave the National Security Council out of sensitive discussions about the agreement."

It fits a recent pattern. When malignant narcissist and fan of dictators Donald "The Chosen One" Trump had his most recent photo-op with North Korean tyrant Kim Jong Un at the Demilitarized Zone, Bolton was sent off to....Mongolia. Apparently Paraguay was booked up.

Whether this signals Bolton's days are numbered, as many are speculating, is unclear. However, even someone as incompetent and intellectually empty as Trump must hear echoes of the disastrous advice given to George "Dumbya" Bush in the aftermath of 9-11 from one of the many purveyors of that advice: John Bolton.

(photo: Seth Wenig/AP.  Mustache support system John Bolton looking over his shoulder for the anticipated shiv.)
Posted by Hackwhackers at 9:00 AM

Labels: Bolton being left out of foreign policy discussions including Afghanistan