Javanka Looked To Replace Pence In 2020 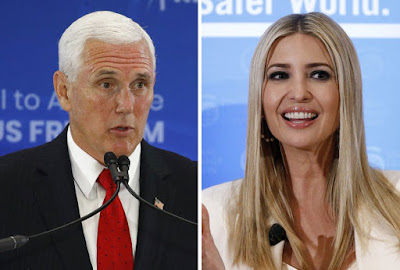 Trump's wooden sycophant and Bible thumping hypocrite VP Mike "Dense" Pence has to sense the whispering that his place on the Trump / Titanic ticket for 2020 is in some jeopardy. Despite Trump's own show of support for his loyal lackey, Pence obviously keeps hearing rumors of a replacement emerging. Trump's former UN Ambassador Nicky Haley issued a bizarre tweet out of nowhere saying she supported Pence and "enough of the rumors." Okaaay, nothing like fueling rumors by acknowledging their existence.

Axios is reporting that two of the major advocates for Haley replacing Pence are none other than inept Machiavellian grifters Jared and Ivanka. They obviously know racist and misogynist Trump is underwater with suburban women, who detest his lying and bullying, his overt racism and his bowing to the National Rifle Rampage Association, among other things. From all indications, they won't get their "dream" ticket from daddy, who would never admit that he needs help with voters, especially women.