Trump To Merkel: "I Have German In My Blood" 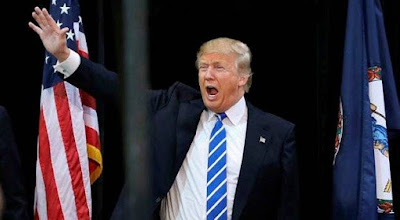 German Chancellor Angela Merkel couldn't suppress a snort and raised eyebrows when, sitting next to neo-fascist buffoon and mentally unstable con man Donald "The Chosen One" Trump at a meeting, Trump declared "I have German in my blood," awkwardly evoking the chant of the neo-Nazis who marched in Charlottesville in 2017 chanting "blood and soil," a Nazi slogan.

Trump's father's family came from Germany and was originally named "Drumpf." As the linked article notes, his grandfather, Friedrich, came to North America during the Yukon gold rush in the late 1890s and established hotels there that also doubled as whore houses. After attempting to return to Germany, Frederick was tossed out for avoiding military service (grandfather would be so proud of his grandson for following in his footsteps).

In the Merkel meeting, Trump jumped on a very lukewarm past invitation to visit Germany, after Merkel was asked about it. It's something that Merkel would be less than thrilled about, given Trump's extreme unpopularity there. Also, you know he'll want to visit the site of Hitler's chancery and bunker in Berlin. Blood and all that.

Labels: Trump tells Angela Merkel "I have German in my blood?