The Impeachment Inquiry Is A Growth Industry So Far


Public opinion has shifted dramatically recently over the news that rotted- out existential threat Donald "Rump" Trump abused his authority by seeking to leverage military aid to Ukraine in exchange for ginning up a scandal involving Joe and Hunter Biden, as well as subsequent cover-ups by the White House (securing additional damning phone transcripts in a code- level secret server) and by Bill Barr's Justice Department trying to deep- six the whistleblower's complaint.  How's that workin' out for ya? 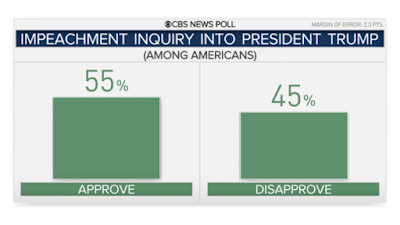 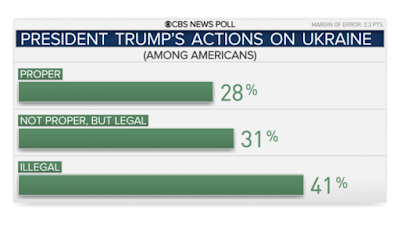 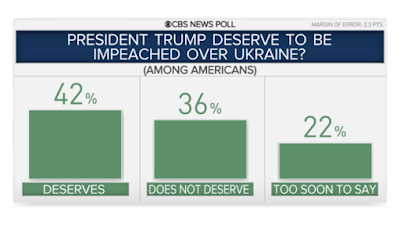 See a summary of recent polls here (conducted before the whistleblower complaint was made public!).

Those are good early numbers and solid starting points, but there's plenty of room for growth as the impeachment inquiry is just getting underway.  Testimony or depositions by key actors in the scandal are on tap;  the whistleblower will be testifying soon to the House Intelligence Committee, according to its chairman, Rep. Adam Schiff;  former Special Envoy to the Ukraine Kurt Volker is also planning to appear before three Congressional committees next Thursday to tell what he knows of the pressure placed on the Ukrainian government by Trump and his addled consigliere Rudy "Ghouliani" Giuliani.  The first subpoena out of the box went to smug lackey Secretary of State Mike Pompeo, and more are coming in short order. Meanwhile, there's the newsworthy spectacle of Trump bootlicks maneuvering to throw each other under the bus =cough= Pompeo =cough= Giuliani =cough= Pence =cough= Barr =cough=.  Let's see where we are in a month.
Posted by W. Hackwhacker at 5:30 PM

I'm glad Nancy Pelosi waited and I'm glad she took action. I tend to be a pessimist, but to me it feels like there's been a shift in momemtum, and the Democrats are gaining strength. And as they gain confidence in the impeachment process, maybe a few Republicans will make a stand. The majority of them will never turn back to the side of good, and they will hopefully get their just rewards and punishments, but if there are some who have a shred of dignity and humanity left, perhaps they'll stand up and say so.

Like I said, I'm a pessimist and this could all be trampled into the dust like the Mueller Report, but I hope it has the power to go forward and make a difference.

donnah -- I think the momentum will only grow, given the existing evidence, what's likely to emerge from subsequent investigation and more people coming forward, etc. Pelosi was wise to focus on the Ukraine scandal because it's easy for people to grasp (except those whose red hats have cut off blood circulation to their brains).