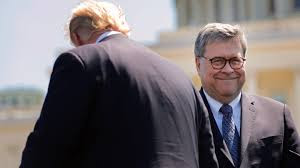 Once again acting as demagogue con man Donald "Impeachable Me" Trump's personal defense attorney, weasely Attorney General William "Low" Barr is attempting to undermine his own Inspector General's report on the origins of the counter-intelligence investigation into Russian interference in the 2016 elections. The report is due out next week, and Barr is questioning the central finding that the FBI had legal justification for investigating members of the Trump campaign who were connected to Russia: Carter Page and George Papadopoulos. Barr's aim in preempting the IG report's findings mirrors his action on the Mueller report, where he mischaracterized the report's findings and spun it as a "no collusion" win for Trump, three weeks before the report was released. It was so egregiously false that Mueller had to write a dissenting letter to Barr and publicly state that the findings did not exonerate Trump.

At the core of the IG findings are that the FBI was tipped to Papadopoulos's statement that Russia hacked Hillary Clinton's emails:


"The Russia investigation was opened after the FBI was told of statements made by a then Trump campaign aide, George Papadopoulos, that the Russians possessed hacked Hillary Clinton emails. Papadopoulos’s alleged comments were key because they were made well before any public allegation that Russian intelligence operatives had hacked the Democratic National Committee."  (our emphasis)

In other words, they had every reason to investigate the links. Barr's contention that his own FBI acted improperly in opening the investigation supports one of Trump's conspiracy theories that the FBI and the "deep state" were out to damage him, when in fact his campaign was getting support from Russian military intelligence. In questioning the major element of the Inspector General's report, Barr is again undermining the FBI in the corrupt service of Trump, and by extension, the Kremlin.

Labels: Barr tries to set false narrative on his IG's report on origins of Russia investigation