"Please To Celebrate In An Orderly Manner!" 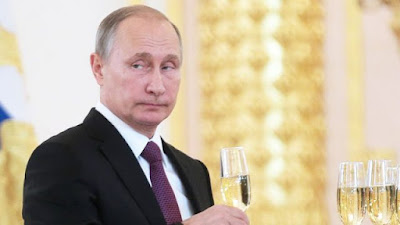 Russian- born sports writer Slava Malamud clues us in on how Russians celebrate Christmas and the New Year in a hilarious essay on their food, festivities, entertainment, and drink... most of all the drink. It's a nice pathological study, too. A small excerpt:


In Russia, the holiday season lasts between December 31 and January 8, with the period between January 1 and January 8 known as The National Hangover, or Mother Russia Needs To Lay Down a Bit. Almost all businesses are closed, right down to newspapers, which don’t come out the whole week, because small letters make Russia’s head hurt this time of the year.

To be sure, the New Year itself is toasted with champagne, usually of the Sovietskoye Shampanskoye brand, known as the main reason Napoleon’s frightened and scandalized troops ran out of Russia in 1812. It’s used to wash down the remains of the Olivier salad and is usually accompanied by tangerines.

But once the time to midnight has been counted down, Russia gets down to the serious celebrating business by pulling its bottle of Stolichnaya out of its ZIL brand refrigerators. There is only one thing Americans should know about drinking with Russians: don’t. It is the number two killer of Americans in the history of inter-country relations, trailing only the cumulative effects of marrying a mail-order bride.

You have to take some time to read the whole, delightful piece. H/t to Balloon Juice for introducing us to this talent.