The Party Of Real America

-- This is the 2018 Census Bureau estimated racial/ ethnic breakout of the total U.S. population (click on charts to enlarge): 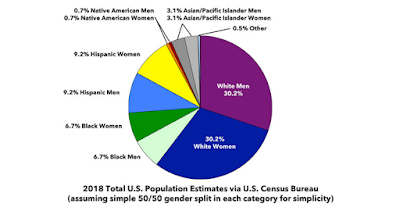 -- This is the racial/ ethnic composition of the U.S. House of Representatives, by party: 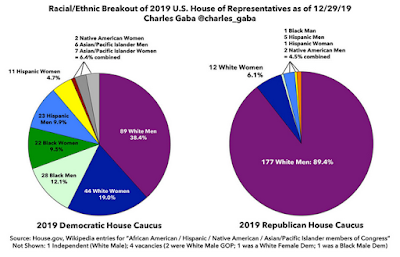 Does it seem one party "looks" more like America than the other?  Maybe that party is the party of Real America;  you know, the Americans rarely the subject of political analyses and media coffee shop safaris.

This is a very telling set of graphics.

I suspect that the Democrats match the country's religious profile (a little over one-fourth non-religious) better than the Republicans do, too -- though it would be harder to gather the data since politicians find it harder to be open about being non-religious.

And I notice that contrary to what the Trumpanzees would reflexively believe, white males aren't under-represented in the Democratic caucus. They're still the biggest group and somewhat larger as a percentage than in the general population.

Infidel -- Democrats in the "people's House" overwhelmingly represent the makeup of America, especially after the 2018 mid-terms, when the blue wave brought in more women and minorities. The party likely reflects the country in other ways, as you suggest. Proud to be a Democrat!