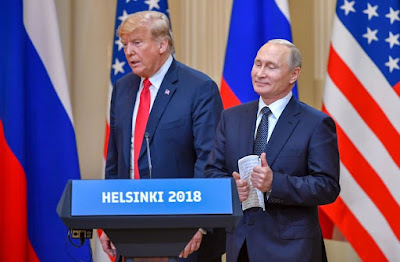 Pro-Kremlin demagogue and malignant narcissist Donald "Impeached Forever" Trump has been busy taking revenge since the corrupt Republican-held Senate gave him a get out of jail pass. Anyone he or his enablers suspect is not 100% loyal to him (and not the U.S.) is fired or removed from their position (e.g., Lt. Col. Vindman, Ambassador Sondland, DNI Director Maguire, etc.).

His purge is being watched closely by our adversaries, in particular Russian thug and crime boss Vladimir Putin, who is reportedly working hard to undermine our fragile relationship with Ukraine, after Trump's shakedown to their president last July. Proponents of a strong and free Ukraine, like former Ambassador Marie Yovanovich and her successor Ambassador William Taylor, have been removed and a vacuum created that's being filled by pro-Kremlin associates of Trump's corrupt and delusional TV lawyer Rudy "Colludy" Giuliani. The Daily Beast has the report:


"A former top Ukrainian official said he is concerned that President Donald Trump’s efforts to force out administration officials deemed to be disloyal from their posts would in the short term leave a hollowed out U.S. office in Kyiv and space for Russia to ratchet up its aggressive political influence operations.

Oleksandr Danylyuk, the former chairman of Ukraine’s national security and defense council, said that as the White House turns its attention to its post-impeachment victory lap, there are growing fears that Russia will step up attempts to distort the relationship between Washington and Kyiv." (our emphasis)

If you think that Trump is concerned about this scenario, you've been drinking his Kool Aid. Indeed, his hatchet man is still stirring the pot over there, aided by Ukrainian operatives linked to Russian security services, to the detriment of our national security:

“Russia is getting more ambitious. They are already taking an aggressive position. Putin knows what he wants and he does not need to seek approval for his actions inside Russia let alone outside of Russia,” Danylyuk said. “There are not enough people in the administration—in the U.S. administration—to focus on Ukraine and Russia issues. A lot of people left. It will not be easy to find several counterparts. I would expect sometime after the presidential elections the U.S. will have to compensate for that. They will have to find a very strong team to deal with this.” (our emphasis)

If Trump gets another four years, Ukraine can say goodbye to U.S. support in their fight against an expansionist, hostile Russia. Because for Trump, all roads lead back to Putin and whatever evil bargain he's made with him.

(photo: After their secret, two hour meeting in Helsinki in 2018, the expressions on their faces tell you everything.)
Posted by Hackwhackers at 10:30 AM