Maryland, Virginia Residents Latest To Get Stay At Home Orders 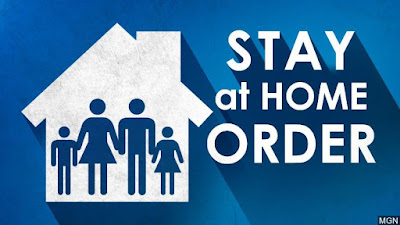 We'll be joining our fellow Marylanders observing a stay at home order effective tonight at 8:00 p.m., just issued by Gov. Larry Hogan.  The Commonwealth of Virginia's Gov. Ralph Northam also issued a stay at home order a short while ago.  Washington, DC, added itself to the growing list moments ago.  Neighboring mid- Atlantic states Delaware and West Virginia had already issued orders on March 24.

As of this moment, that makes 28 states and the District of Columbia with such orders in effect, representing more than two- thirds of the country's population.

Be safe, friends! It's a strange new reality. We Ohioans have gotten pretty good at this. I only go out if I have to, and today that was a trip to the post office for mailing packages for my home business. I wore gloves, kept a distance, and left immediately. I am otherwise housebound. I have a mom and a mother-in-law who are high risk, so I don't dare expose them to any possible contagion.

So take care and be well. We need you!

donnah -- thanks! Good advice, too!