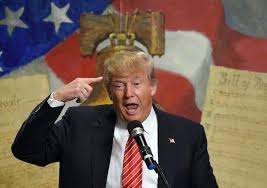 "The final death toll from coronavirus will not be the result of viral disease; it will be the result of mental disease.  The greatest risk factor of disease and death is not being considered, and that is Donald Trump.  If he continues in this presidency, he is on course for having three main effects: First, he will make a deadly pandemic much worse.  Second, he will stoke divisions between 'believers' and 'unbelievers' in his alternative reality.  And third, he will vastly augment suffering, which he will be tempted to direct into widespread violence." -- Yale University forensic psychiatrist Dr. Bandy X. Lee, in a must read article that argues that the Very Stable Genius' narcissism, lack of conscience, detachment from reality, and mental instability will cause countless more deaths from the COVID-19 pandemic.

In 2017, Dr. Lee edited a book of essays by 27 mental health professionals, "The Dangerous Case of Donald Trump," which argued that Trump's mental instability and pathology threatened democracy itself. Considering the danger posed by Trump to be unprecedented, the doctors came forward saying they had a "duty to warn" the public that his erratic behavior was dangerous to the country.
Posted by Hackwhackers at 4:00 PM