Turns Out "The Party Of Life" Has Higher Priorities 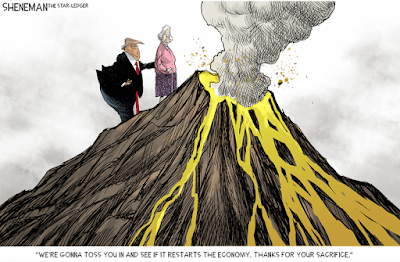 The next time you hear the rotted- out Republican Party refer to itself as the "Party of Life," because of its sanctimonious solicitousness for life before birth (but not after!), remember what its real priority is and always has been:  holding power at all costs.  To these two- legged rats, keeping power means keeping the economy from tanking and maintaining the fiction that they've been its smart stewards.  It's especially evident since the icon and Dear Leader of the party, sociopathic nitwit Donald "Moron Vector" Trump is in a fever to put people at risk in the misbegotten service of saving the economy his re- election chances. (Karma's a bitch: As we note in an earlier post below, the COVID-19 cases are increasing in states that voted for Moron Vector.)

When #gopdeathpanels started to trend as a result of comments by Texas Republican Lt. Gov. Dan "Under The Bus, Grandma" Patrick, dumbest person in the Senate and shame of Wisconsin Ron "Tiny" Johnson, and right- wing media twatwaffles like Fox "News'" Steve Hilton and Glenn Beck (who said "I'd rather die than kill the country" -- be our guest, Glennie!), it should have been (but likely won't be) a permanent definer of the essential hypocrisy and deep cynicism of this collection of sociopaths, con artists and misfits calling itself a party.  These "pro- lifers" are perfectly willing to sacrifice the most vulnerable to prop up their political and financial fortunes and those of the likes of Dear Leader, just like their facile abandonment of their small government, laissez- faire philosophy for a big government -- shall we say socialist -- philosophy, occurs only when their cushy asses are on the line.  (If they were going to use the cudgel of "socialism" against even the most centrist Democrats this year, the trillions of pump- priming dollars they voted to go into the private sector should dispense with that line of attack.)

Were it not for the criminal incompetence of Dear Leader in the early days of the crisis, and continuing to this day with his refusal to use the Defense Production Act to get critical supplies and ventilators manufactured and deployed, we wouldn't hear these right- wing social Darwinists revealing themselves as the selfish sociopaths that they and Dear Leader are.  Now that they've said their quiet parts out loud, don't ever let them get away with that "Party of Life" bullshit.

They've never been the party of life. They're the party of controlling and punishing women's sexuality. It's just that "life" sounds better.

Infidel -- it's a misnomer of the same magnitude as "Very Stable Genius" Trump!


Their fetus fetish is just cover to vote for awful policies by awful people.