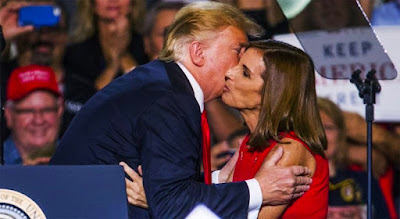 Malignant narcissist and inject-bleach-to-kill COVID advocate Donald "Disinfectant Donnie" Trump flew to Arizona today to have a cynical photo op at a Honeywell International mask production facility, and more importantly for him, give his loyal cultist Sen. Martha "McSnarly" McSally a boost in her tight election campaign with astronaut and former Navy Capt. Mark Kelly. McSally, who has lashed herself to the Dear Leader, is running behind Kelly in most polling, and has shown odd flashes of anger that signal that she knows it.

Trumper McSally has shown she will say anything to endear herself to Trump, and has no problem lying about her "accomplishments" like him:


"Arizona received 100 ventilators only after making an initial request for 5,000 of the devices. The request, though initially approved by the Department of Health and Human Services, was later slashed by 90 percent to 500 when it dawned on state officials that the Trump administration didn’t have anywhere near the resources to meet it. The 100 ventilators, championed as “a huge deal” by McSally on Twitter, amount to one-fiftieth of the state’s original request.

The $8 billion in federal assistance for Native American tribes—which McSally’s office declared she had “successfully secured” for the state’s large tribal population, despite her twice voting for versions of the CARES Act relief package that contained no money for tribes and the money eventually being added to the legislation by Senate Democrats—has also put McSally in the position of having to either support the president or a major constituency in Arizona. The funds are currently frozen, caught in the middle of a lawsuit between the Trump administration and federally recognized tribes over whether it should be apportioned to Alaska Native corporations." (our emphasis)

We can't think of an endangered Rethuglican Senator up for election who has been so obsequious and fawning toward Trump in a clear effort to unite his base behind her. As negative attitudes and unfavorable ratings for him increase, these days McSally is looking more like a short-termer than even her cult leader.