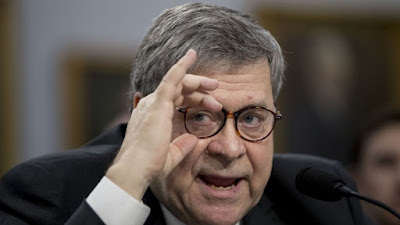 The House Judiciary Committee will hear testimony from corrupt Trump consigliere William "Low" Barr today, and there is every expectation that Barr will launch a vigorous defense of his Dear Leader with regard to the use of Federal paramilitary forces, interference in the cases of Trump's allies, and Russia's interference in the 2016 elections and its ongoing meddling. Writing an op-ed in the Washington Post this morning, Norm Eisen, the impeachment counsel to the House Judiciary Committee, sets the stage:


“'Where’s my Roy Cohn?' That was President Trump’s famous lament after then-Attorney General Jeff Sessions recused himself from the Russia investigation. But in Sessions’s eventual replacement, William P. Barr, Trump may have done even better — by his standards — than Cohn, the notoriously unscrupulous defense lawyer.

As Barr prepares to testify before the House Judiciary Committee for the first time as Trump’s attorney general, he has instead come to resemble another disgraced lawyer of the past: former attorney general John Mitchell, whose misplaced loyalty to President Richard M. Nixon outweighed the duty he owed to the Justice Department and the country."  (our emphasis)

Given Barr's craven service to Trump there are a multitude of issues that the Committee is expected to raise, not that Barr will be in any way forthcoming:


"On the Mueller report, the committee should compare Barr’s now notorious summary to what is actually in that document. A judge found that Barr engaged in 'a calculated attempt to influence public discourse about the Mueller Report in favor of President Trump.' Barr should be pressed to explain why he failed to disclose that Mueller lacked 'confidence … that the President clearly did not commit obstruction of justice.'

On Ukraine, the committee should pin Barr down on what he knew about the decision to keep the whistleblower complaint from Congress. What was Barr’s involvement? Did he discuss the effort to suppress the complaint with the president or other White House officials?

The committee should also question Barr on his changing accounts of his role in the assault on peaceful protesters at Lafayette Square, examining his contacts with Justice and White House officials who said Barr ordered the actions. It is also imperative to address Barr’s role in the recent 'surge' of federal law enforcement into Portland, Ore., and other cities."  (our emphasis)

There's more ground to cover, including his meddling in the cases of Michael Flynn and Roger Stone, and his firing of SDNY U.S. Attorney Geoffrey Berman, who was overseeing cases involving Trump personally. Barr will be his evasive and uncooperative self, aided by Rethuglican committee members like Rep. "Gym" Jordan, so Dems need to be focused and coordinated in their questioning.

As much as I would love to see Barr skewered, I have no faith whatsoever in his testimony. None. He will chew up our hapless Democrats and spit them out. He'll be belligerent, haughty, dismissive and rude. Gym Jordan will be shouting from the sidelines and no one will stop him. We've seen this show before. We didn't score any points and we didn't prove anything.

Sorry to be Donna Downer, but this will be for naught.

donnah -- We join you in your pessimism. For the most part, the Dems have trouble dealing with unscrupulous, mendacious witnesses who have practiced their "art" for a long time. At best, there may be some soundbites that make Barr look like the scoundrel that he is, but not counting on it.

I could only take about 15 minutes of listening to Barr, but the Dems were doing pretty well trying to pin the artful dodger.