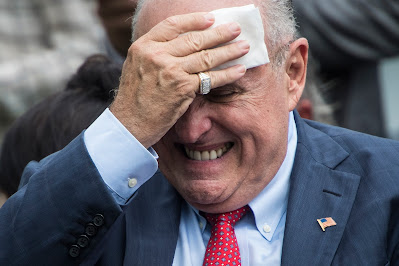 The bug-eyed crazy tool of Russian intelligence and Trump's "personal lawyer" Rudy "Colludey" Giuliani has been pushing smears on former VP Joe Biden and his son Hunter for well over a year. The latest debunked smear aimed at influencing the election was concocted by Russian intelligence officers in Ukraine and fed to Giuliani, who eagerly promoted them to demagogue and Kremlin asset Donald "Tovarich" Trump and right-wing media like the New York (Com)Post. Ironically, it was Giuliani mucking around in Ukraine, more than anyone but Trump himself, that set in motion Trump's impeachment on abuse of power and obstruction of justice charges. The fool has a fool for a lawyer. Giuliani is believed to be under investigation for his earlier activities in Ukraine, which the White (Supremacist) House was warned about.

Now, with Rudy Colludey's "October surprise" fizzling, there may be an underlying reason why the disgraced former New York City mayor can't see through the Russian borscht being thrown at him. Newsweek reports on last night's appearance by former Trump fixer Michael Cohen, who sees Giuliani being manipulated by the Kremlin:

"Ari Melber, host of The Beat on MSNBC, asked Cohen: 'Do you think Rudy Giuliani is being used as a tool and a hack of the Russians, whether or not it passes a legal line and do you think that's wrong?'

Cohen replied: 'Of course it's wrong and the answer is yes,' Cohen replied. 'Rudy is being played by the Russians.' [snip]

'He's 100 percent susceptible to being used by the Russians because... the disinformation, he runs right back to President Trump like a child running to a parent: (saying) 'Look what I have. Look what I have.'"

He described how Trump 'speaks and behaves like the mob boss' and that 'he's using his soldier', referring to attempts in Ukraine at getting dirt on the former vice president.

'The problem here is that Rudy isn't a soldier. Rudy is—Rudy is drunk all the time, which is a big problem and that's what makes him susceptible because his faculties are gone. He behaves crazy.'" (our emphasis)

The latest Russian disinformation campaign designed to help their asset Trump is now being investigated by Federal authorities. It's bound to disclose a direct pipeline from the Kremlin through Giuliani to Trump, as with so many things.

Labels: Giuliani reportedly "drunk all the time" and susceptible to Russian influence