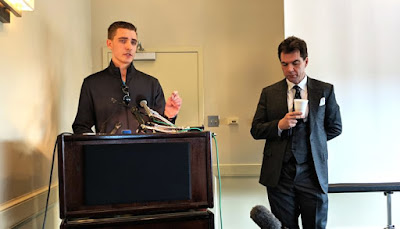 Professional (no offense to "professionals") Republican ratfuckers Jacob "Asshole" Wohl and Jack "Fly" Burkman have managed to get caught in another fraudulent scheme:

After already having been indicted in Michigan for a robocall scheme to intimidate urban-area voters with misinformation, the fabulously inept duo of Jacob Wohl and Jack Burkman have now been indicted in Cuyahoga County for the same scheme.

Congresswoman Marcia Fudge was among those who noted after the Michigan case was unveiled that similar calls had been reported in Cleveland.

This is the same dynamic duo that tried to get Pete Buttigieg framed for sexual assault.  That was shortly after they failed to get Robert Mueller framed for a similarly bogus charge (but did manage to make a laughingstock of Burkman, who appeared at the news conference laying out the accusations with his fly down).  Oh, and there was their ludicrous attempt to link Sen. Elizabeth Warren to a younger ex- Marine boy toy (which the Senator dispatched with a witty "Go, Cougars!" shout out to her University of Houston alma mater's mascot).  If these duds were smart, they might be dangerous.

But, for their latest capers, they've graduated from performance art ratfuckery to multiple felony counts in both Michigan and Ohio.  They're due their day in court, after which we say, "Lock them up, lock them up!"

President Elizabeth Warren. An old boy can dream. Probably 20 years ahead of her time. But Biden is fine, like sweet cherry wine. Wife and my ballots are in the mail.

Burkman, who appeared at the news conference laying out the accusations with his fly down

Another "Lord of the Flies"! With enemies like these, who needs friends?

Seriously, as the indictments pile up, one can hope that at some point a conviction will be obtained and their rodent-molestation spree will come to an end. If public figures could sue for defamation, these guys would have been squelched a long time ago. I do like the "Go, Cougars" thing, though.

Infidel -- the fly theme is strong! Hopefully, they've reached the end of their "Jacob and Jack Follies" run.

These guy's must have thought "Dumb & Dumber" was an aspiration self-help guide.

I thought of these two when Tin-tray Tucker Carlson was ranting about how the Deep State (UPS) stole his absolutely devastating Hunter Biden evidence. Could they use a third for the vaudeville act?