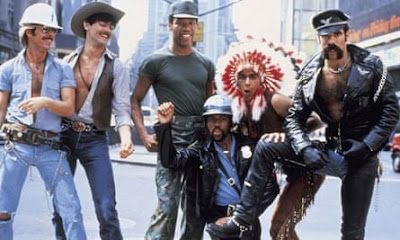 White supremacist demagogue and COVID-19 spreader Donald "COVID Donnie" Trump, high as a kite on steroids, appeared yesterday in Sanford, Fl to a gathering of his mouth-breathing cult to brag that he was now "immune" from the virus -- a lie by any standards -- and that he wanted to wade into the crown to give them a "big fat kiss." The vast majority of the cultists didn't wear masks or social distance, and shouted their approval of Dear Leader, almost certainly spreading some aerosolized COVID-19.

After he took the stage for his lying, reality-averse tirade, his campaign thought it would be a good idea to play the Village People's hit "Macho Man" as fake religious-right homophobe COVID Donnie fist pumped and gyrated clumsily to the gay anthem. CNN's Anderson Cooper was, shall we say, gobsmacked:

Anderson Cooper’s face when he hears they are playing “Macho Man” at @realDonaldTrump ‘s rally. 🤣🤣🤣🤣 pic.twitter.com/1SK23Z6yeR

This past Sunday was National Coming Out Day, but this is ridiculous....and hilarious. Shake your obese booty, Donnie!