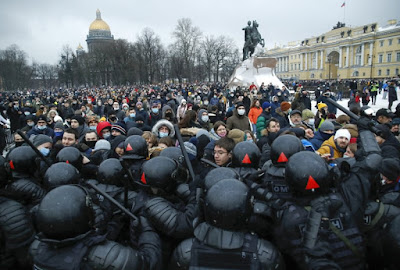 It was Russian asset and autocratic demagogue Donald "Tovarich" Trump's fondest wish that he could operate in the same manner as his idol, Russian thug Vladimir Putin, and create a state apparatus answerable solely to him. That was Trump's idea behind the January 6 Capitol insurrection, using a big lie to seize illegitimate control of the Government using a violent mob and to install him indefinitely as a fascistic ruler. Despite the assistance of his seditionist Republican lackeys like Sens. Ted Coup and Josh "Haw Haw" Hawley, the insurrection failed and Trump quit, leaving his supporters angry and more confused.

The demonstrations across Russia in the past two days are a reverse image of the delusional Capitol seditionists in that they are seeking democracy and not autocracy, as they protest the continued jailing of opposition leader Alexei Navalny. According to reports, some 3,300 have been arrested in roughly 70 cities and communities across the Russian Federation:

"The wide turnout sent a powerful message to the Kremlin on the reach and resolve of Navalny’s network. The swift crackdowns by authorities underscored the pressure facing Russian authorities who must decide whether to keep Navalny behind bars.

Navalny once more proved he can mobilize mass support to confront Putin’s government, particularly among young Russians, and even when he is behind bars.

Scuffles broke out in central Moscow, and police beat protesters with batons, according to video posted by independent media. Protesters at times pelted police with snowballs and plastic bottles.

'Putin is a thief,' some chanted in Moscow. 'This is my home, I’m not afraid!' Passing cars honked in support."  (our emphasis)

The Biden Administration should offer unqualified support for the release of Navalny and for the protection of his democracy movement. It's something that the Putin-serving Trump regime never did, for fear of Putin's displeasure with his American stooge, even after Putin's SolarWinds hack of our computer systems and after he put bounties on our troops in Afghanistan.