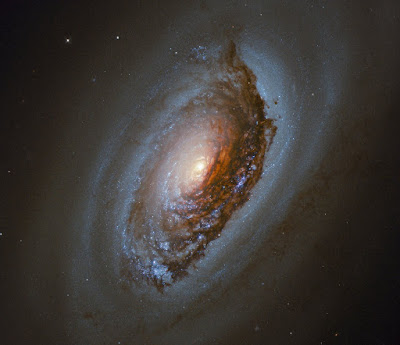 From NASA/ESA, February 22, 2021: This NASA/ESA Hubble Space Telescope Picture of the Week features NGC4826 — a spiral galaxy located 17 million light-years away in the constellation of Coma Berenices (Berenice’s Hair). This galaxy is often referred to as the “Black Eye”, or “Evil Eye”, galaxy because of the dark band of dust that sweeps across one side of its bright nucleus.

NGC4826 is known by astronomers for its strange internal motion. The gas in the outer regions of this galaxy and the gas in its inner regions are rotating in opposite directions, which might be related to a recent merger. New stars are forming in the region where the counter rotating gases collide.

This galaxy was first discovered in 1779 by the English astronomer Edward Pigott.

donnah -- they keep finding them, we'll keep posting them!

Well, you guys know how much I enjoy seeing them, so I'm very happy!