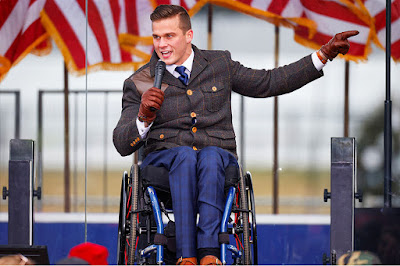 This profile in the Washington Post of young Trumpist zealot rising star Rep. Madison Cawthorn (Sedition - NC) demonstrates the level of deceit at the heart of the Trumpist movement. Cawthorn, wheelchair-bound since an automobile accident in 2014, spoke at both the January 6 sedition rally that turned deadly and two days ago at the white supremacist Conservative Conspiracist Political Action Conference in Orlando. In both, he repeated the Big Lie that his cult leader, Donald "Mango Mussolini" Trump, had won the election, but that it was stolen from him. Here's some of what the Post found about Cawthorn:

"Madison Cawthorn was a 21-year-old freshman at a conservative Christian college when he spoke at chapel, testifying about his relationship with God. He talked emotionally about the day a car accident left him partially paralyzed and reliant on a wheelchair. [snip]

Key parts of Cawthorn’s talk, however, were not true. The friend, Bradley Ledford, who has not previously spoken publicly about the chapel speech, said in an interview that Cawthorn’s account was false and that he pulled Cawthorn from the wreckage. [snip]

Shortly after the speech, Cawthorn dropped out of the college after a single semester of mostly D’s, he said in the deposition, which was taken as part of a court case regarding insurance. Later, more than 150 former students signed a letter accusing him of being a sexual predator, which Cawthorn has denied." (our emphasis)

That's just the beginning; the whole profile is a must read. His backstory is replete with lies and misrepresentations of his academic record and much more. The profile paints a picture of an ambitious, morally vacuous, lying sexual predator who has played upon his disability for attention while engaging in the spread of extreme right-wing talking points and sedition. If you ignore the wheelchair, he's just another Gym Jordan, Matt Gaetz, Greasy Donald Trump, Jr., or a young Mango Mussolini himself.

Him and Abbot in Texas who won a big settlement for the incident that put him in a wheelchir and then pulled the ladder up behind himself by pushing for laws that would disenfranchise anyone else who had the same misfortune.
Those two are so slimy they probably need seatbelts to avoid sliding out of their chairs onto the floor where they belong.