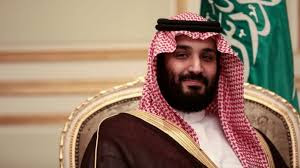 Over a month into his presidency, President Joe Biden is expected to call King Salman of Saudi Arabia soon, rather than the country's nominal leader, Crown Prince Mohammad bin 'Bone Saw" Salman, signaling his concern over his role in the murder of journalist Jamal Khashoggi in 2018. The delay in calling the Saudis also signals the Biden Administration's concerns that Bone Saw was corruptly close to the Trump regime, in particular to grifter son-in-law Jared "Mr. Ivanka Trump" Kushner. Bone Saw once claimed that he had Kushner "in his pocket" over Kushner's financial difficulties with failed real estate deals. Bone Saw's also been ruthless in eliminating palace rivals, and has cracked down on human rights in the feudal kingdom. In contrast to Biden's approach, Saudi Arabia was the first foreign country visited by authoritarian seditionist and con man Donald "Former Guy" Trump, who was given an over-the- top welcome by the Saudis, courtesy of Bone Saw.

The Biden Administration halted arms shipments to Saudi Arabia over it's abuse of weaponry in its proxy war in Yemen against its Iranian nemesis, demonstrating that the days of arming the Saudis in order to profiteer from weapons sales may be curtailed drastically. Our European and Asian allies should also reexamine their arms sales to the Saudis as long as Bone Saw is the de facto ruler.

Man, Biden has all the moves. He's been around long enough to see what's real, who's in charge, and know what's going on with these world leaders. Skeptics who questioned Biden's leadership qualities need to take a seat and watch him roll.