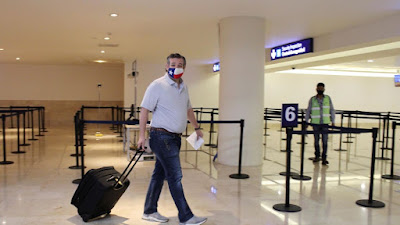 NBC News reports that one of neo-fascist seditionist and smarmy demagogue Sen. Ted "Cancun Cruz" Cruz's many detractors in the Senate had some fun with Cruz's bungling trip to Cancun while his Texas constituents froze in the dark:

"When senators arrived at the Senate gym on Wednesday morning, they found that one of them had taped memes on the lockers welcoming Cruz home and showing him in the short-sleeve polo shirt, jeans and Texas-flag mask that he had at the airport, according to two people familiar with the prank. 'Bienvenido de Nuevo, Ted!' was the “welcome back” message typed at the top of the color printouts, one of which was viewed by NBC News.

The rendering featured a manipulated photo of Cruz from his well-documented trip to Mexico, dragging his luggage across an arctic landscape while holding a tropical cocktail garnished with a slice of fruit in his other hand. He is shown walking toward an image of a masked Sen. Bernie Sanders, I-Vt. with his arms crossed and wearing striped, knitted gloves — a pose famously captured during January’s inauguration."

The equally slippery, opportunistic charlatan Sen. Lindsey "Huckleberry" Graham (Sedition-SC) had this to say about Cruz in 2016, so you know it could have been anyone, Dem or Republican:

“If you killed Ted Cruz on the floor of the Senate, and the trial was in the Senate, nobody would convict you."

"Speaking at the Conservative Political Action Committee’s annual conference in Orlando, Florida, on Friday, the Texas senator bombed his way through what can only be described as an ill-advised attempt at stand-up comedy. Cruz’s routine cycled through jokes on so-called cancel culture—”Jerry Seinfeld doesn’t tell comedy anymore because every joke has been canceled” (what?)—while he intermittently scream-demanded for people to “JUST HAVE FUN” before reiterating his absolute fealty to the twice-impeached former president who had once insulted his wife’s appearance and claimed that Cruz’s father had played a part in JFK’s assassination. “Let me tell ya right now: Donald J. Trump ain’t goin’ anywhere.” Cruz also tried to make light of his disastrous decision to jet off to Cancun last week while millions of Texans remained without power, hospitals in his state ran out of water, and at least 80 people died from the catastrophic storms.

'I’ve got to say, Orlando is awesome,' Cruz boomed into the microphone. 'It’s not as nice as Cancun, but it’s nice." (our emphasis)

Hyuk hyuk, you're killin' 'em Ted, KILLIN' 'em, although it's probably best you don't take your comedy act back to Texas just yet. Hyuk hyuk.

(photo: A pathetic-looking Cancun Cruz tows his roller bag thru the Cancun Airport)

"Here's the thing you have to understand about Ted Cruz, I like Ted Cruz more than most of my other colleagues like Ted Cruz. And I hate Ted Cruz."