Who Did Nazi This Coming?

According to the Anti-Defamation League, a common neo-Nazi symbol is the Othala Rune, a symbol from the runic alphabet system that was adopted by Nazi Germany as one of its runic symbols. This is what it looks like:

There are slight variations of the symbol, especially one used by the neo-Nazi National Socialist Movement to distinguish it from the Nazi swastika. For example, if you look closely at photos from the neo-Nazi / alt Right riot in Charlottesville in 2017,  you'll see this symbol and variations of it on banners, shields, patches, etc.: 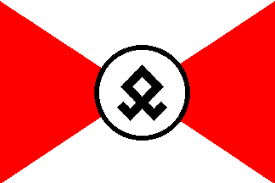 With that as background, is it so hard to believe that the unusual design of the stage at the current Conservative Conspiracist Political Action Conference, pictured below, was intentional, and meant as a wink and nod to the Trumpist white supremacist base?

Labels: Is shape stage at CPAC a message to neo-Nazis?, Republican insurrectionists

I saw that stage layout on Twitter and read the comments about what it represents. It gave me cold chills. This country is in dangerous territory when half the nations politics are based on white power, Nazi-inspired hate speech. Soon this won't just be the dark web or the underground, and this proves how bold they're becoming.

I hope there's enough awareness and caution on the Dems side to stop this.

donnah -- Us, too. They've given up trying to sell "ideas" -- however false or half baked -- and are moving to the next level: overt voter suppression, intimidation and insurrection.