A Year Of American Renewal, Thanks To Democrats 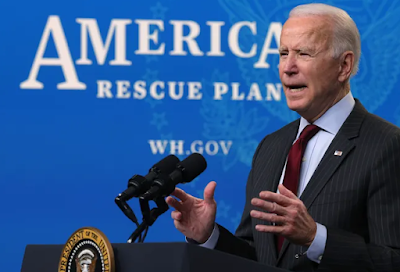 Before we move on too quickly, a little more crowing is in order regarding the passage of the COVID relief and stimulus bill (American Rescue Plan Act), and why it's such an important piece of legislation at any time, but particularly so early in the Biden Administration.  Here are some facts:

The roughly $1.9 trillion American Rescue Plan, which only Democrats supported, spends most of the money on low-income and middle-class Americans and state and local governments, with very little funding going toward companies. The plan is one of the largest federal responses to a downturn Congress has enacted and economists estimate it will boost growth this year to the highest level in decades and reduce the number of Americans living in poverty by a third.  [snip]

“This legislative package likely represents the most effective set of policies for reducing child poverty ever in one bill, especially among Black and Latinx children,” said Indivar Dutta-Gupta, co-executive director of the Georgetown Center on Poverty and Inequality. “The Biden administration is seeing this more like a wartime mobilization. They’ll deal with any downside risks later on.”

The total numbers are staggering. Cumulatively, the government will hand out $2.2 trillion to workers and families between the relief passed last year and this latest bill, according to the Committee for a Responsible Federal Budget, a nonpartisan group. That’s equivalent to what the government spends annually on Social Security, Medicare and Medicaid combined.  [snip]

The Democratic stimulus package also provides significant funding for vaccine distribution and state and local governments. Business and health leaders say getting most Americans vaccinated is key to the economic recovery. But most of the attention on the bill has focused on its overall price tag and the payments that are set to go to about 150 million American households.

The latest stimulus will reduce poverty by a third, lifting nearly 13 million Americans out of it, according to an analysis by Columbia University’s Center on Poverty and Social Policy. Black Americans, Hispanic Americans and poor families with children are set to benefit the most. Child poverty would be reduced by more than half, the researchers predict.  [snip]

The magnitude of aid, especially combined with last year’s relief, is much greater than the U.S. government has responded to other economic crises. The response to the Great Recession was about $1.8 trillion over several years and the most optimistic estimates are that about 6 million Americans were kept out of poverty in 2009 because of efforts by Congress at the time.

Biden and his top officials have repeatedly said they have learned lessons from the mistakes made during the Great Recession response. This time around they want to go big enough to ensure jobs return swiftly. They want a package that, in the words of White House press secretary Jen Psaki, will get families “talking about it at their dinner tables.”

Though it would seem unnecessary to point out what this bill will mean to millions of Americans, the bad faith two- legged rats (a.k.a., the Republican Party) and their faithful hacks in the media have already started a campaign of lies about the bill.  Therefore, Democrats need to do one other thing they largely failed to do after they passed the Affordable Care Act in 2010:  mount an aggressive political- style public relations campaign that anticipates the Republican disinformation effort and targets the party in general, and vulnerable Representatives and Senators in particular, for their obstruction and opposition to helping Americans during this crisis that their former guy made much worse than it had to be.

This is going to be a year of American renewal, and Democrats can and must claim exclusive rights to that renewal.  Keep up the victory lap!

I'm thrilled that this bill passed and I'm hopeful that it expedites help and renewal for so much of what's necessary for Americans. Republicans hate losing, so of course Mitch McConnell will lead the crybaby chorus against it, but I agree that we need to champion the win across the board, and show people that we are the party of caring and saving lives.

Biden's already proving his ability to get things done for us, and hopefully he gets Covid under control. But we will always be fighting Republicans, empowered by the former guy to push their hateful agenda of racism and cruelty. But we're stronger now. We need to show everyone that we can get good things done.

donnah -- that's the key: showing Democrats can come through on their (good) promises. Ignore the bad faith Republican whinging and do what you were elected to do.

Pop in law is not happy. He's trying to find the scripture to explain why Jesus abandoned us and allowed a CATHOLIC to become presnident. Just keep praisin' and praying that we'll wake up from this nightmare and God's annoited will be back in the White House. Oh and remember to send your socialist payoff to presnident former guy so he can pay his legal fees. Thus sayeth the pop in law.

Seafury -- you have our deepest condolences!