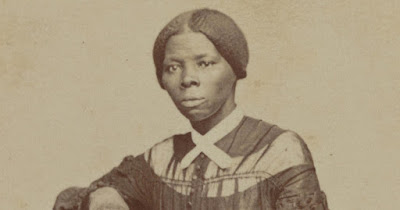 Lost for generations, the site of the family home of Harriet Tubman, the liberator of slaves behind the "underground railroad," has been located in Dorchester, Co., Maryland, by a tireless team of archeologists working for the Maryland State Highway Administration. Maryland state and Federal officials announced the discovery this morning.

In the decade before the Civil War, Tubman guided dozens of enslaved people out of bondage to safety in the North using a network of safe houses and back roads. It all started with the discovery of a coin in the swampy area near Blackwater River:

"Archaeologist Julie Schablitsky found the coin with her metal detector along an old, abandoned road in an isolated area of Maryland’s Eastern Shore. She dug it out of the ground and scraped off the mud.

She hadn’t been finding much as she and her team probed the swampy terrain of Dorchester County last fall searching for the lost site where the famous Underground Railroad conductor Harriet Tubman lived with her family in the early 1800s.

She’d been frustrated that there had been no hint that she was anywhere near the home of Tubman’s father, Ben Ross. But as she cleaned the coin, the profile of a woman with flowing hair, and wearing a cap that said, 'Liberty,' emerged. At the bottom was the date: 1808.  [snip]

The structure, of unknown form, was owned by her father. A timber foreman and lumberjack who had been enslaved, he had been given his freedom, the house where he lived, and a piece of land near the Blackwater River by his enslaver.

Officials said bricks, datable pieces of 19th-century pottery, a button, a drawer pull, a pipe stem, old records, and the location all pointed to the spot being the likely site of the Ben Ross cabin." (our emphasis)

Tubman's father, an underground railroad operative himself, was instrumental in teaching a young Harriet the backwoods and marshes on Maryland's Eastern shore, and in facilitating the escape of some family members and other enslaved people.

It's a truly fascinating story about Tubman's background, her family, and the struggles she faced in freeing others, as well as the archeological sleuthing it took to find her long lost family home.

Posted by Hackwhackers at 6:30 PM

WOW!! Just WOW!! I'd love to find sumin' like that!!But, I guess I have to go a-lookin'!! HA!
I very much regret not pursuing archeology, or, paleontology.
Thank you for this post & backstory !!!