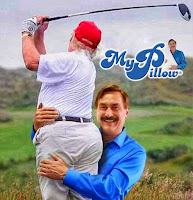 BANNON: “Why is Mike Lindell not on Fox, and why do they seem to say, ‘Hey, when Dominion says something we’re just going to shut up about it and talk about Biden’s tax bill’?”

LINDELL: “Well, you know, I’m going to have those answers, too, ‘cause I’ve hired private investigators, and I’ve spent a lot of money on them, to investigate everything. Why are … the bots and trolls, who’s behind them? Why is Facebook involved, Wikipedia involved? And then the big question, why isn’t Fox having people on? Why isn’t Fox on there talking about, you know, Dominion and Smartmatic and the election fraud?”

To which we would have responded, "Because, dumbass, Dominion and Smartmatic are suing Fox and you for billions for frequently defaming them by lying about their machines switching votes." (Also, Wikipedia's in on the conspiracy according to the Pillow Guy. Get the straight jacket!)

But please do spend every last dime you have on "investigations," after which you lose your failing pillow business when Dominion and Smartmatic liquidate your assets and collect. Perhaps then your Dear Leader will hire you as the pillow concierge at Merde-O-Lardo.

(image: The inspiration for "MyPillow")

Labels: Fox "News", Mike Lindell, Pillow guy Lindell says he's investigating Fox for not having him on the air